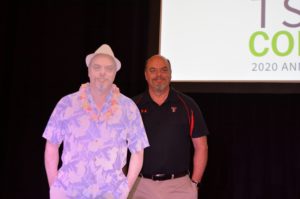 A 39-year veteran of school PR in both Indiana and Texas, Tim Carroll was honored ahead of his retirement with the 2020 President’s Award in recognition of his contributions to the profession as well as his continued support and guidance to the Texas School Public Relations Association and its members. Tim served as TSPRA President during the 2011-2012 year. He is the winner of numerous Star Awards and has sat on nearly as many TSPRA committees during his 25 years as a member. He has served as the longtime MC of the Star Awards Banquet at the TSPRA Annual Conference.